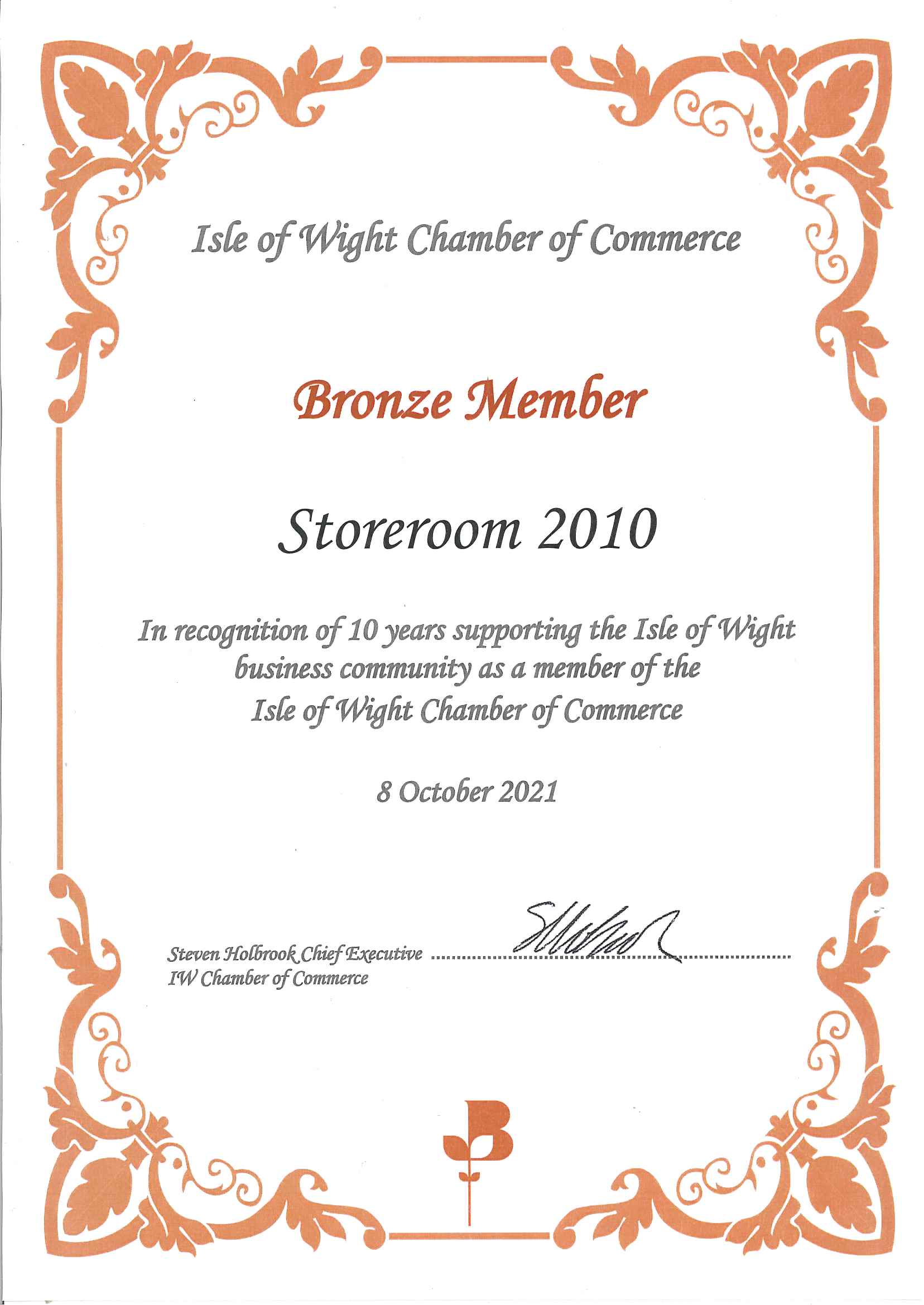 Due to the pandemic, events everywhere are few and far between.  At Storeroom we were able to join in with this year’s Isle of Wight Day on 11th September 2021.  Got in a bit of a pickle when sorting out the flags though! 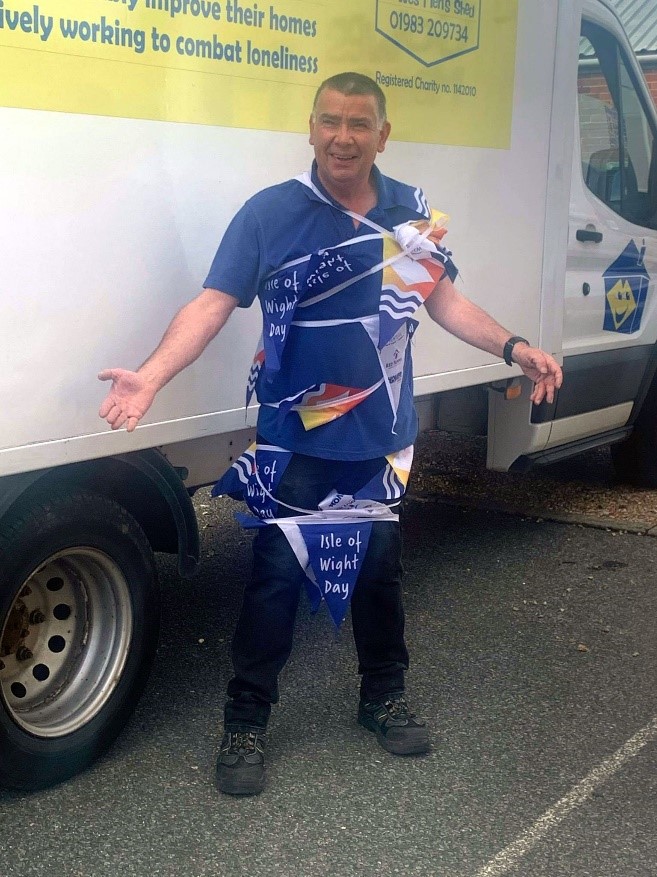 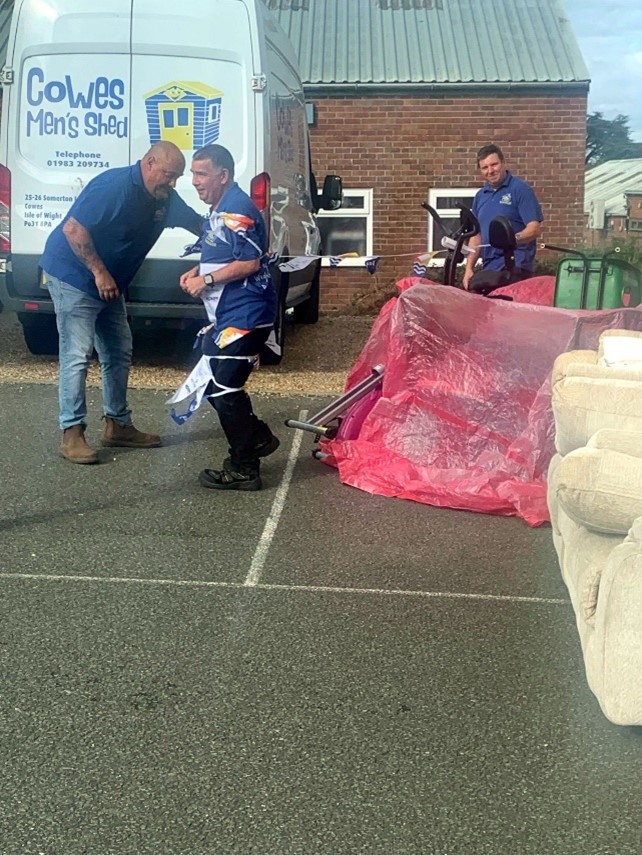 Our local MP, Bob Seely visited the Cowes Men’s Shed on Friday 17th January 2020, he liked what he saw – but who wouldn’t?! 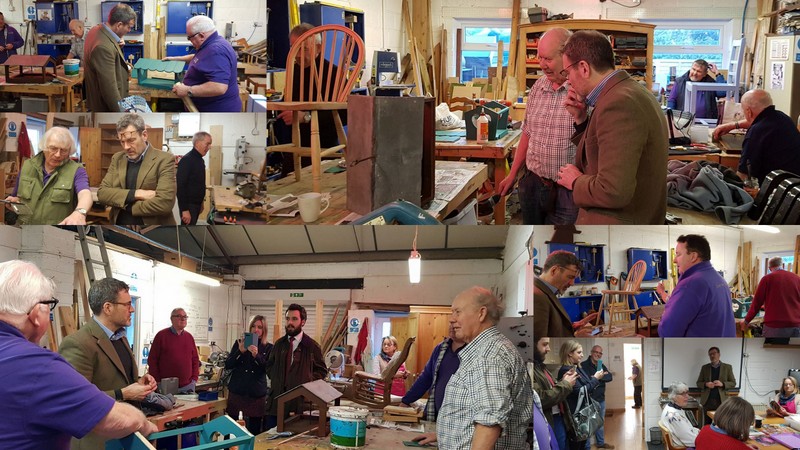 The Cowes Men’s Shed had a Christmas Party on Friday 20th December 2019.  Many of our members were able to attend. 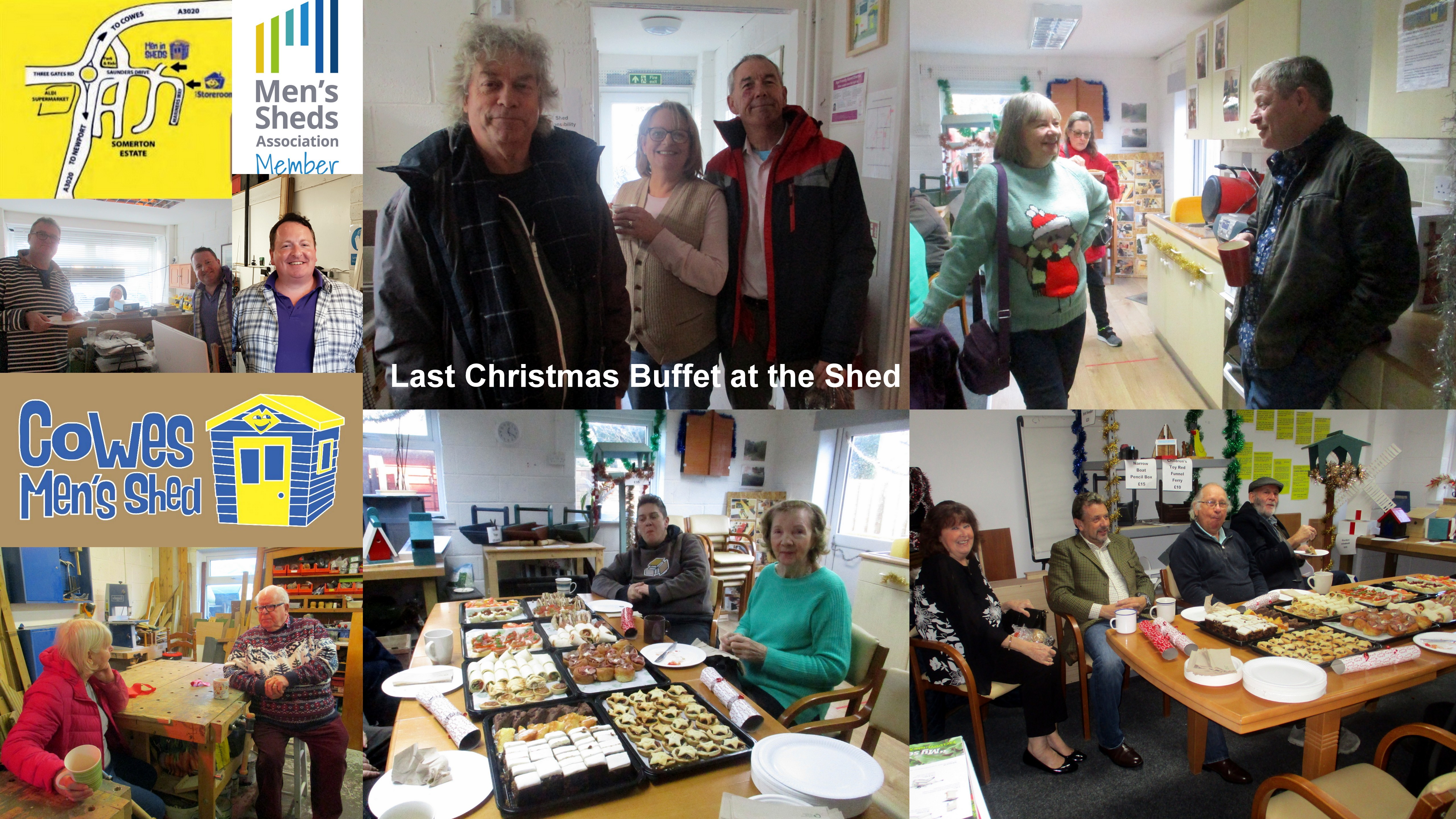 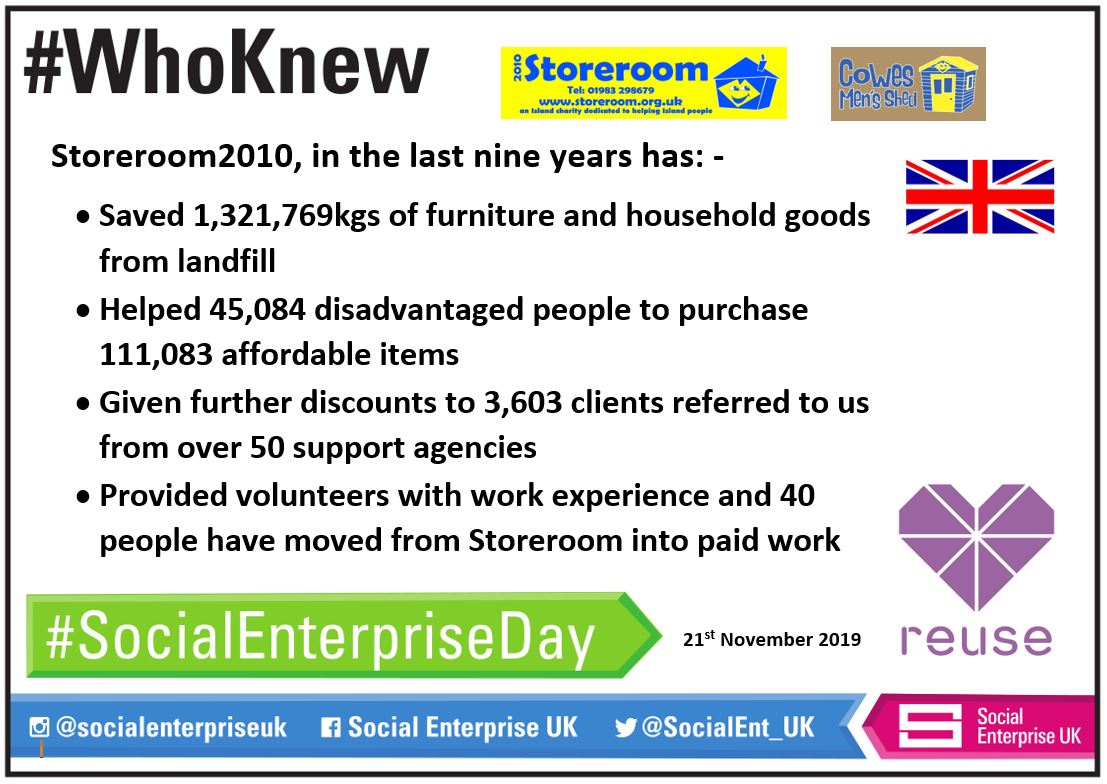 The Cowes Men’s Shed enjoyed a Hog Roast and Pop up Shop event on 16 October 2019.  The Mayor of Cowes, Lora Peacey-Wilcox and Deputy Lord Lieutenant to the Isle of Wight, Nicholas Oulton attended too! 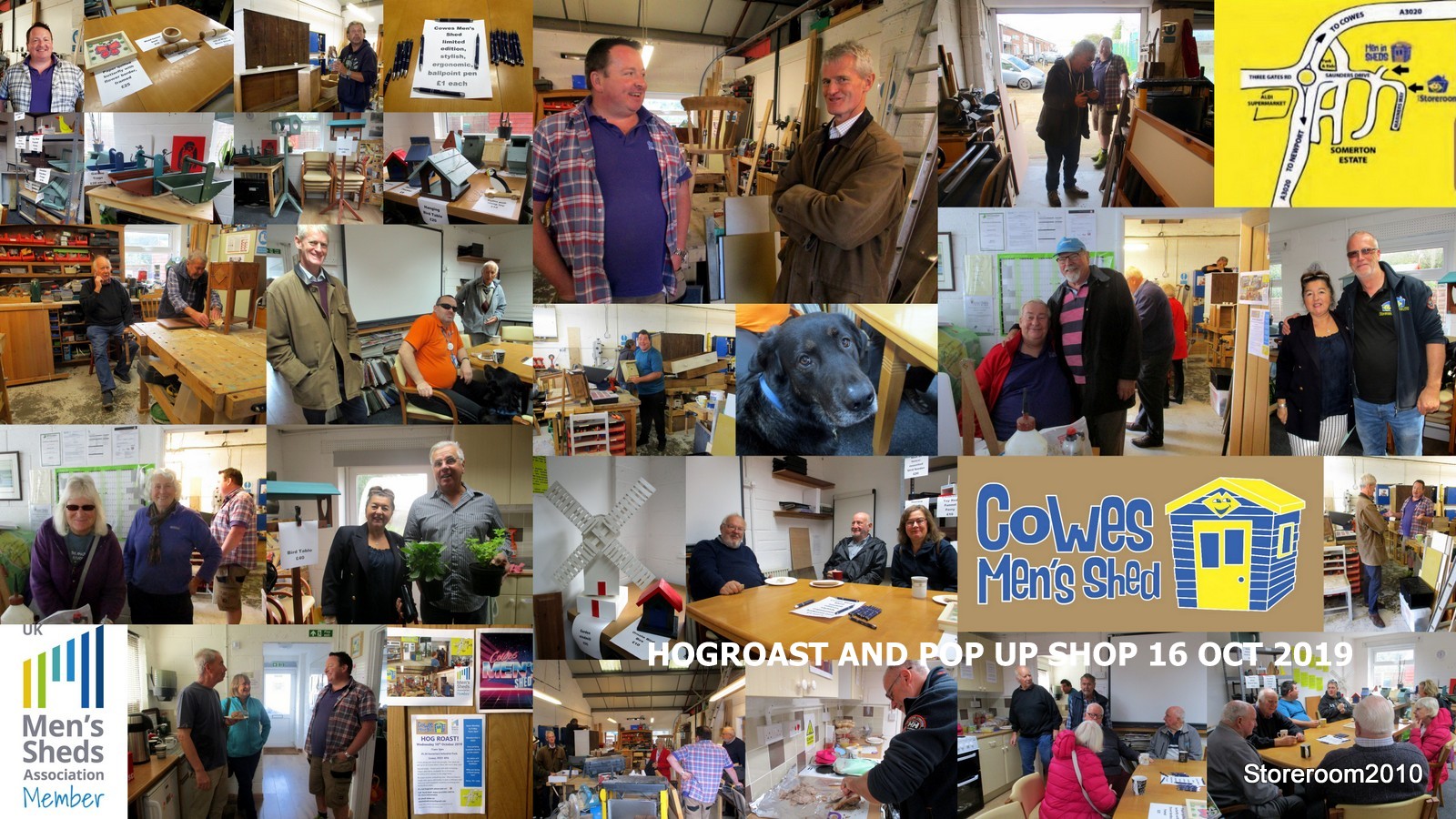 Everyone enjoyed a great bacon butties event at The Cowes Men’s Shed.  Lots of new faces came along to see what the Shed has to offer 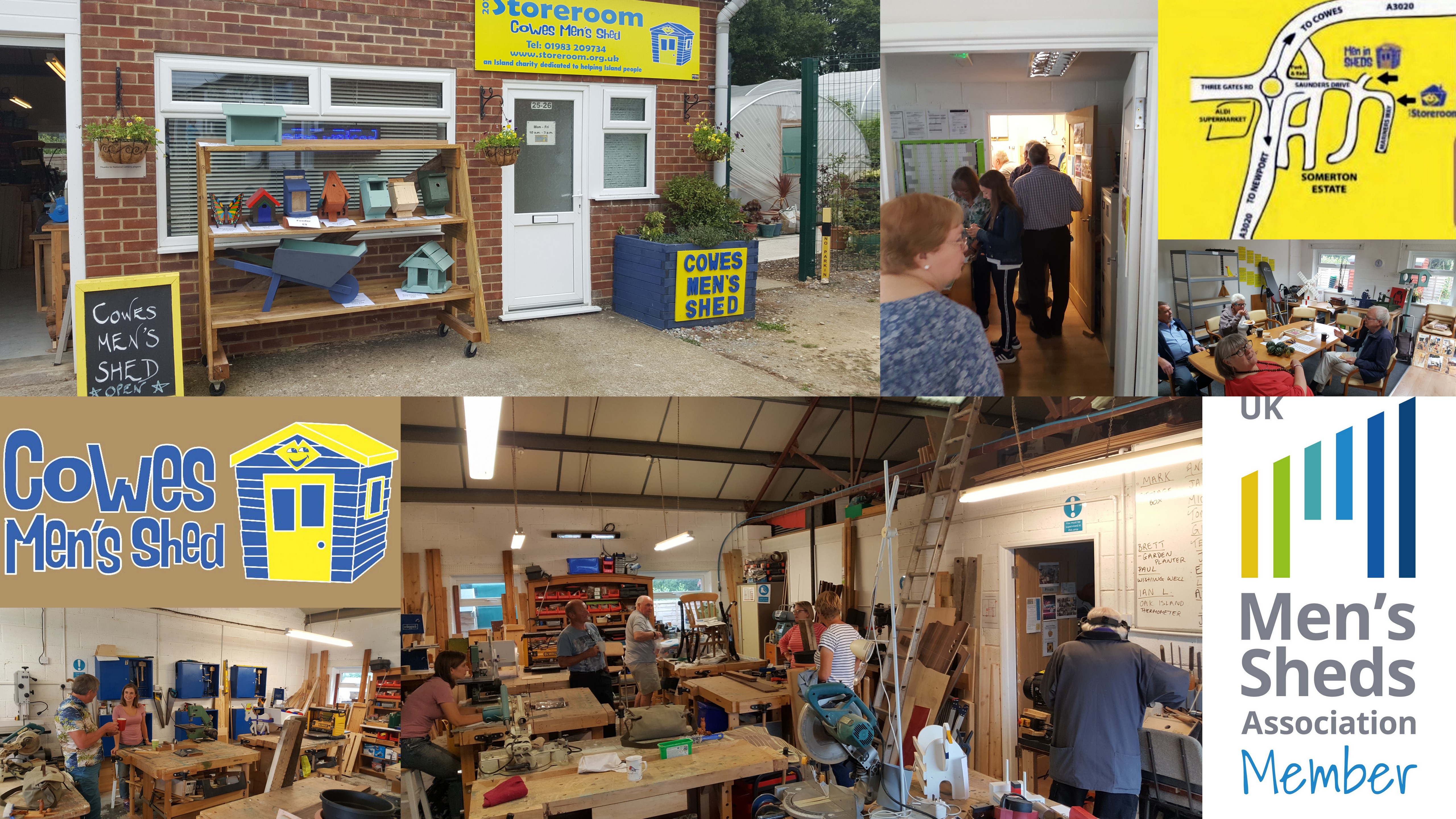 The Storeroom furniture re-use charity began life at Unit 42, Bridge Road, Cowes on 1st July 2010.  The premises were very basic compared to our modern warehouse at 1 Mariners Way, which we moved to August 2013.

In the last nine years we have seen the closure and decline of various support services for those in our community who are in genuine need, which has made so many lives even more difficult.  No-one should never underestimate how much disadvantaged people appreciate the opportunity to purchase affordable furniture to make their living space more comfortable, so it has been heartening in the last twelve months to have seen a few new schemes emerge which are helping people in this way.

The referral service operated by Storeroom, receives referrals from over 50 support agencies, giving those people in need a discount on many items we stock. The premises at 25 Somerton became part of Storeroom Charity on 1 May 2015 and originally housed our Education project.  Sadly due to lack of funding, we could not forward plan and Education closed four years later.  In that time Education had run a successful Skills Gap training project, which saw 678 learners.  Of these, 152 people attended for an activity and 526 learners took an accredited course and gained a recognised certification (NOCN) to show prospective employers their achievement.  Learner’s new trades based skills would have helped them in their home life as well as with employment opportunities.  Around 20% of Education’s learners went on into employment, self-employment or further education after they finished their course, or in some cases, courses.

25,26 Somerton Industrial Park now houses our Community Project The Cowes Men’s Shed, brought to you by Storeroom2010 and supported by funding from #NationalLottery and various other generous funders.  At the end of its first year the Shed had over 50 members and the number is still growing.  There is a well equipped carpentry workshop and horticulture areas too, most of which are under cover in polytunnels.

Here is Laurie Mabbit of Age UK IW presenting the Charter to Adam on 25th June 2019.

Adam received the charter on behalf of Storeroom2010 and The Cowes Men’s Shed. 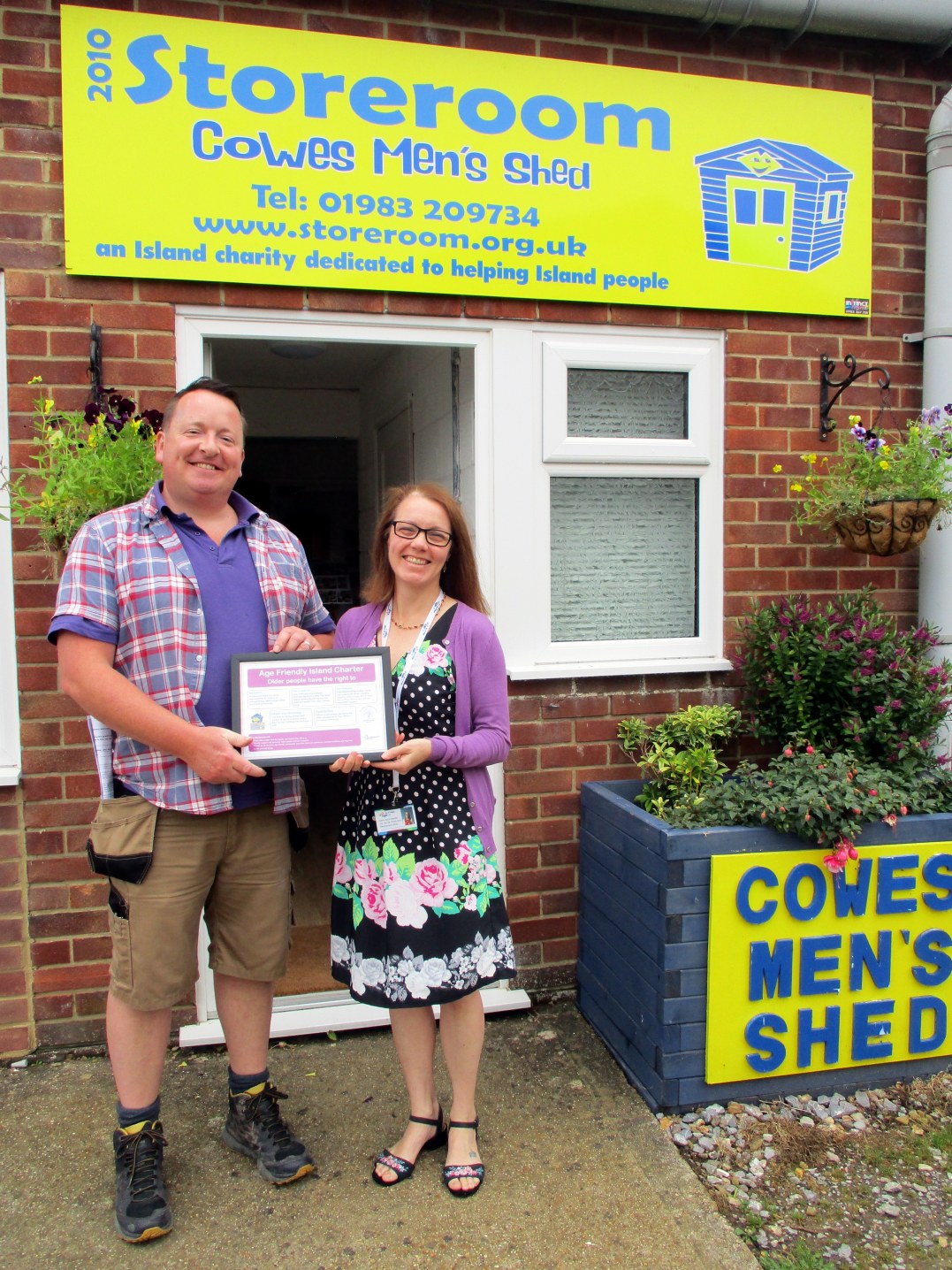 #CBWkd19 Community Business Weekend is the annual open doors event that celebrates communities in England who are using business to transform where they live.
Pop in to see us, have a chat, browse our stock, hear just how we help our community and have a free snack – cakes and crisps available.  Here are just a few of Storeroom’s supportive customers who popped in to see us on the Community Business Weekend.

Below are the team from our shop who were on hand all day to answer questions.

The Cowes Men’s Shed celebrated its first birthday on 14 May 2019.  There was a delicious buffet and a huge group of people attended over the course of the day.  Nick England, Deputy Lord Lieutenant to the Isle of Wight was pleased to attend and discovered what goes on in the Shed.

We even received a couple of Birthday cards!

There was a Tea and Toast event on Valentine’s Day at The Cowes Men’s Shed on 14 February 2019, with heart shaped toast!   Quite a crowd came along and enjoyed a natter, a game of darts, some quality time in the workshop and of course, tea and toast! 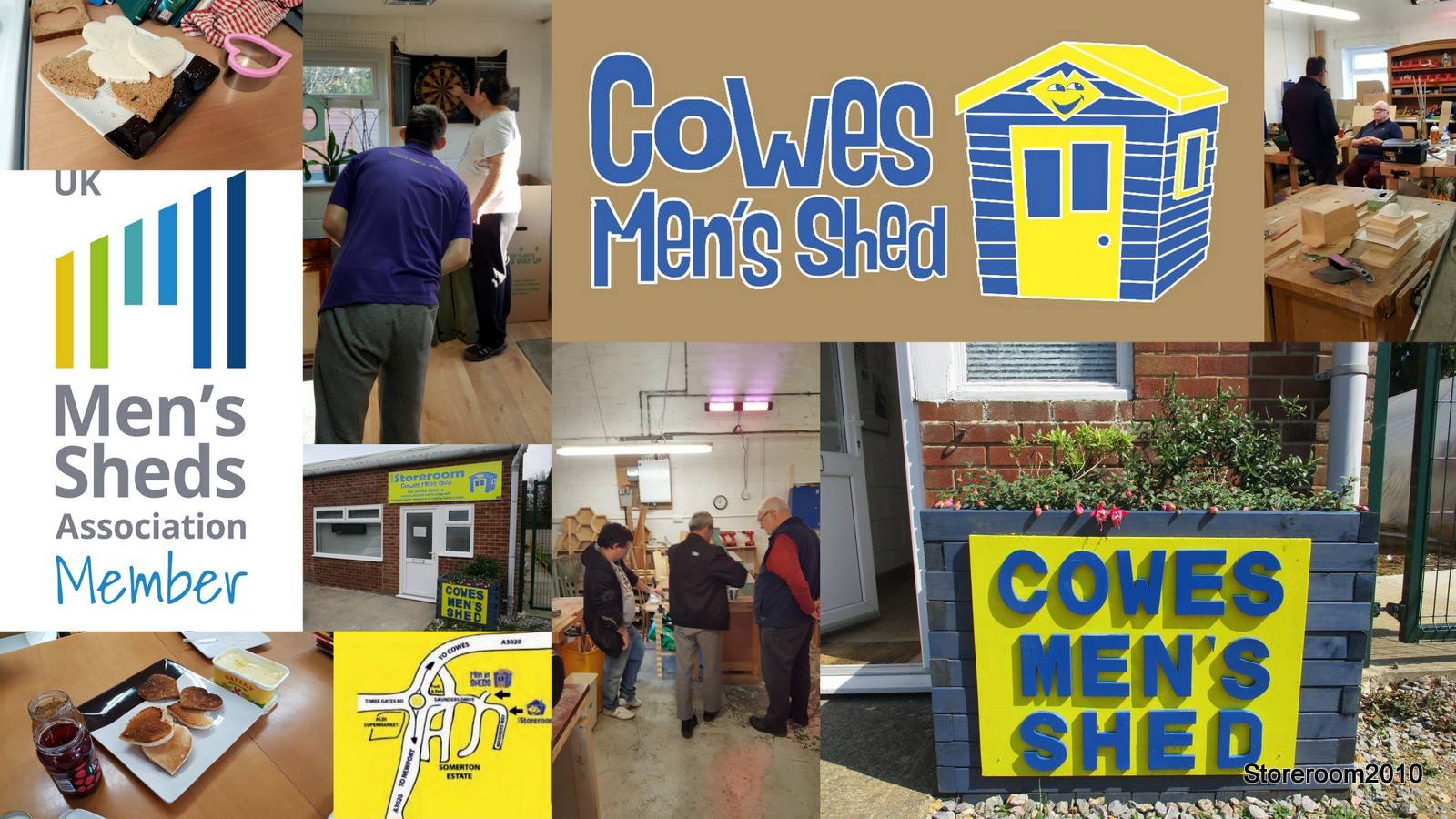 We updated our information board for Storeroom awareness day.  Did you see us when you were out and about doing your food shopping?  We were at Tesco Ryde on Thursday 7 February 2019 between 10am-2pm 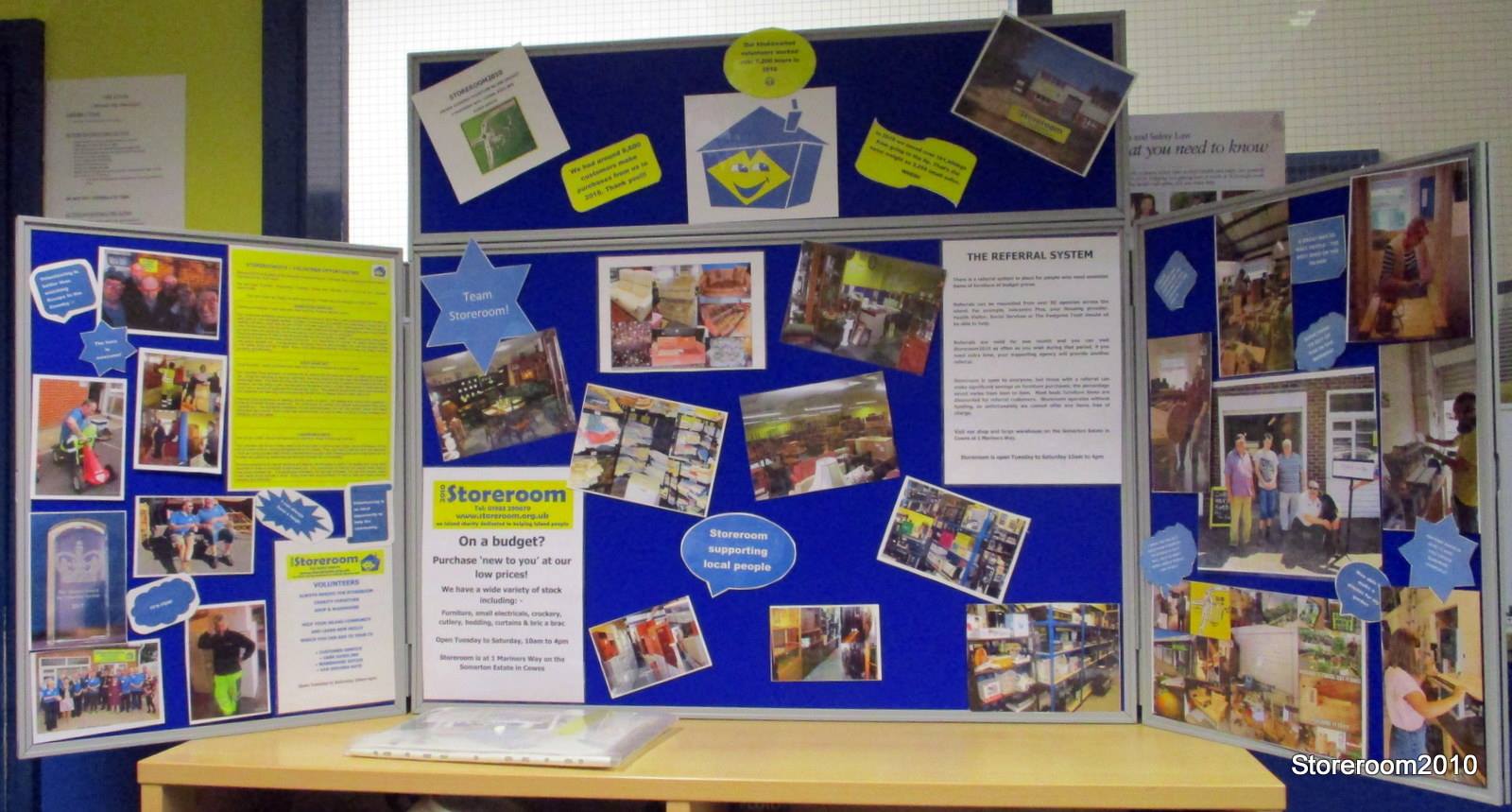 Monday 26 November 2018 saw a well attended Social Event at The Cowes Men’s Shed.  Adam brought his guitar in and everyone had a Christmas sing song! 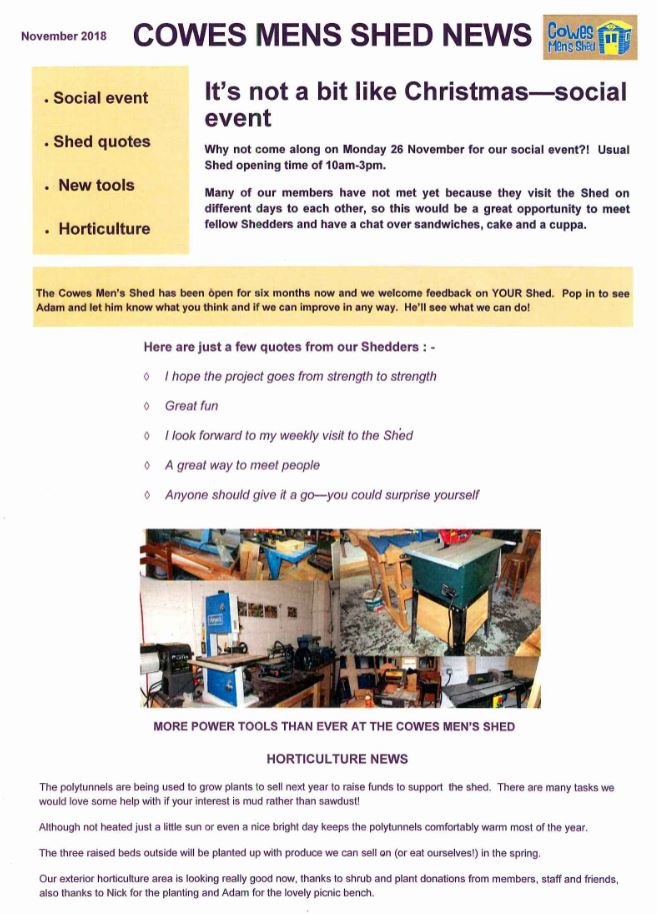 Storeroom supported Buy Nothing New Day on Friday 24th November 2018.  In 2017, UK customers were expected to spend up to £8bn during #BlackFriday weekend. Just imagine if even half of that huge amount of money was spent in reuse charity shops instead – what an amazing amount of good it would do for local charities – think how much they could achieve with the extra monies!  #BuyNothingNew

You’ll be familiar with Black Friday, one of the many American marketing ploys to have made its way to this side of the Atlantic, where shops “slash” their prices and people (allegedly) camp outside the shops, scrambling on top of each other as soon as the doors open to get the best bargain.  In protest to this, Buy Nothing Day – was started in 1992 by a Canadian artist named Ted Dave – and was moved to the same day as Black Friday to raise awareness of consumerism.

The Reuse Network (Storeroom are members) decided to put their own little reuse spin on this, and make it Buy Nothing New Day! 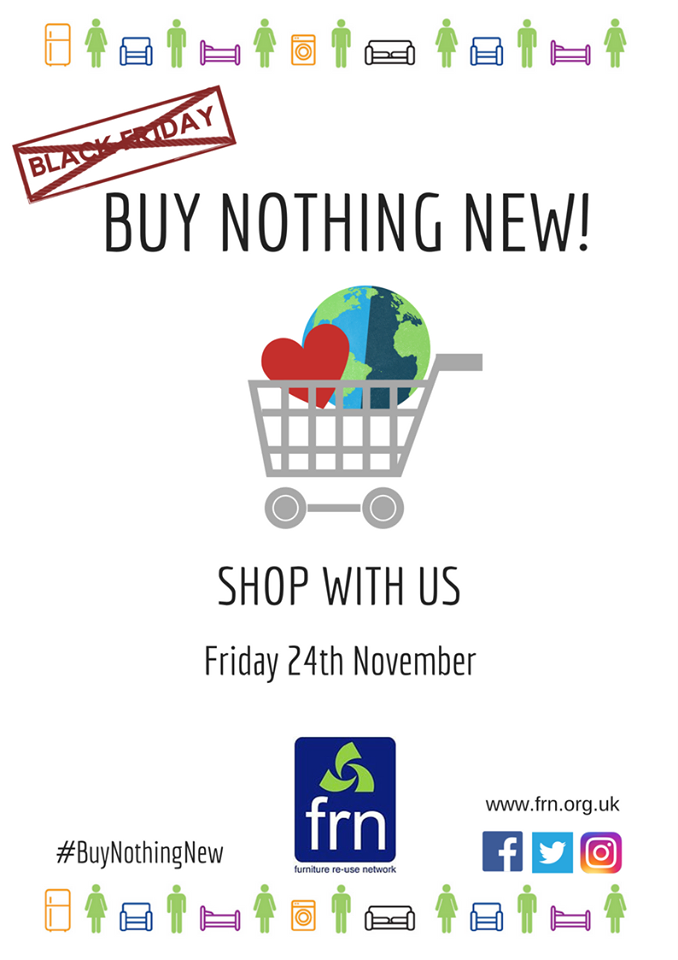 On 15th October 2018 the Cowes Men’s Shed had a Bacon Butty event which was well attended with new faces; including some local councillors who were very enthusiastic about this new Community Project from Storeroom2010.  Some staff and volunteers sneaked in for a butty too!
Thank you to everyone who came along. 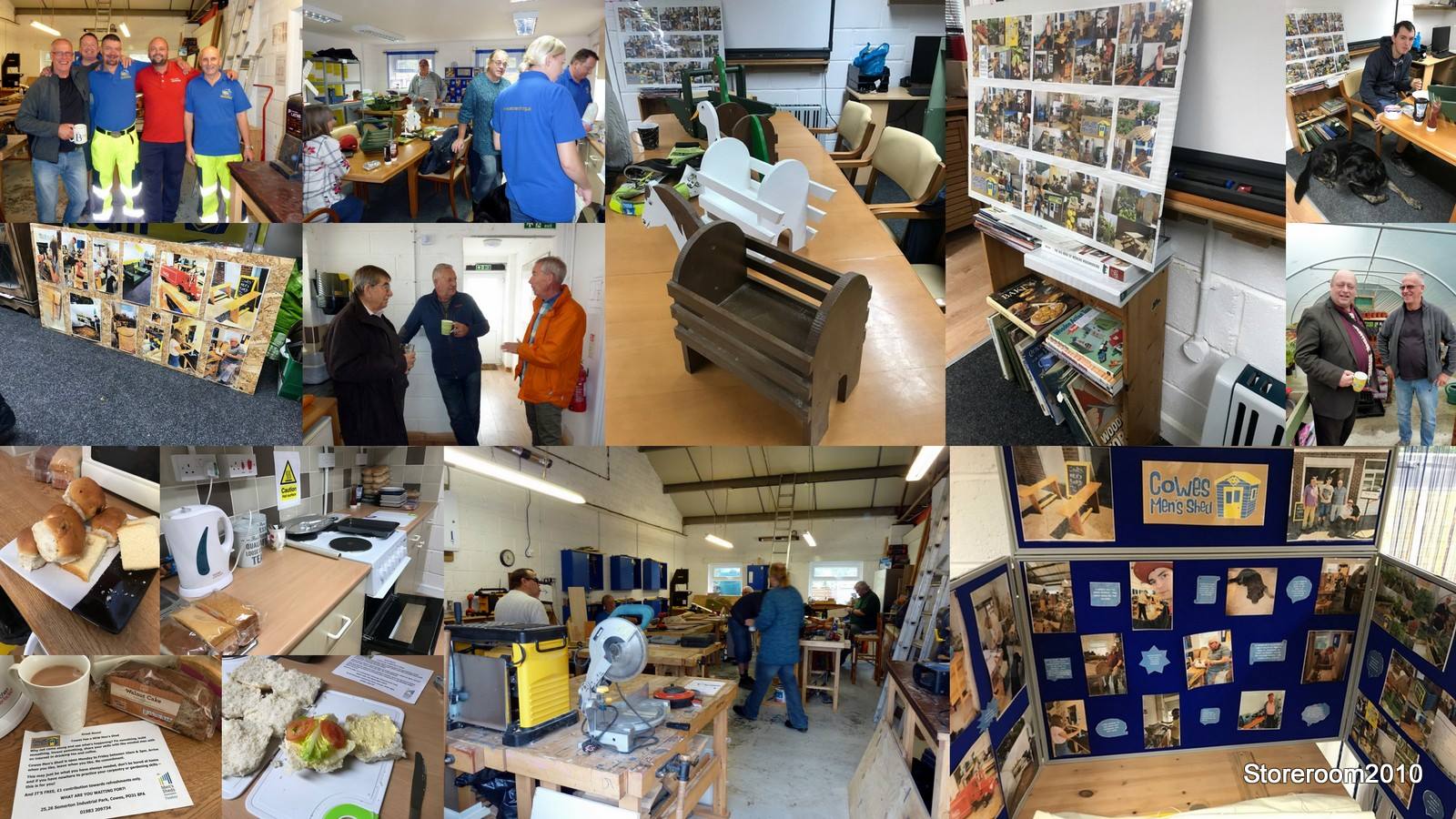 CBA members enjoyed a Networking event at Cowes Men’s Shed on 26th September 2018.  Everyone popped their business cards into the raffle and there were three prizes.  The cheese and wine buffet went down well too. 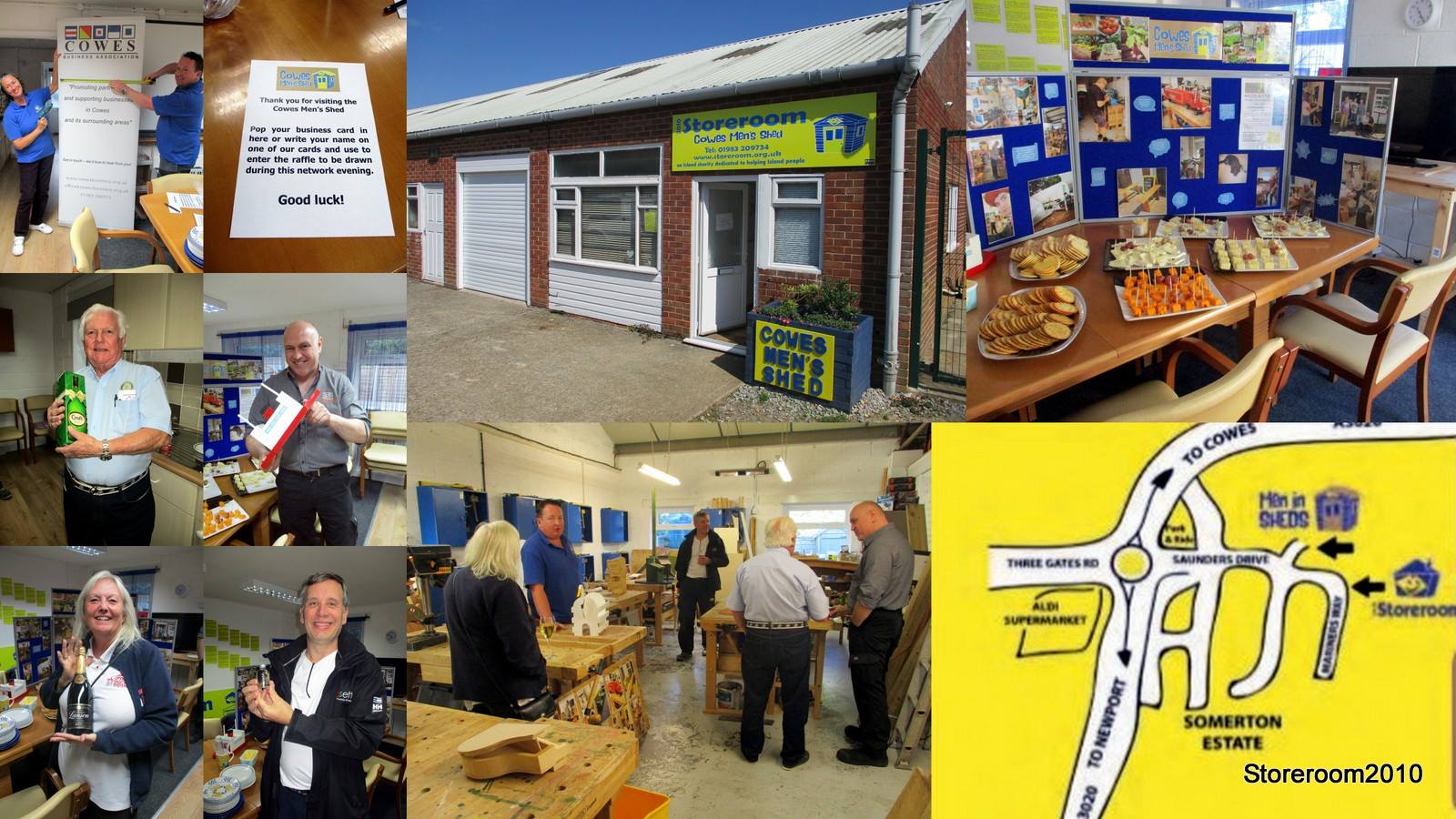 Storeroom – serving the Isle of Wight Community since 1 July 2010. 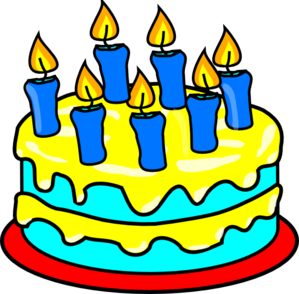 Storeroom2010 hosts Open Day
This bank holiday weekend, Storeroom2010 in Cowes is joining community businesses around the country to celebrate the third annual Community Business Weekend.
Aimed at shining a light on the 7,000 community businesses across England, Community Business Weekend offers a unique opportunity for local people to visit and see how they can get involved.
On Friday 4th May, Storeroom2010, which has been serving the Isle of Wight Community since 2010, hosted an open day.
Kerri Salter from Storeroom said: “Many people are unaware that Storeroom provides a one stop shopping experience, with a great range of pre-loved furniture and household goods at very affordable prices.  Storeroom is involved in the Community Business Weekend as we have benefited from funding from Power to Change, which enabled us to purchase our premises and secured our future for the Isle of Wight Community.
Peter Jenkins, Interim Chief Executive at organisers Power to Change, added: “Every day tens of thousands of people get up and go to work at one of the 7,000 community businesses in England.  Hundreds of thousands of us shop, visit or benefit from them directly, but they are still relatively unknown.
“That’s why Community Business Weekend is so important. It shines a light on these community gems that bring not only much needed services and spaces to a community, but boost local economies and reinvest the profits for the benefit of local people.
“Top-down regeneration and devolution has failed to transform many disadvantaged areas, but communities, best placed to know what their neighbourhood’s need and what works, usually thrive when they’re given the power to tackle these issues themselves.”
Community Businesses are organisations rooted in a local area. They range from skate parks to libraries, tea rooms to vineyards and have a combined market income of £1.2bn in England, according to recent research. Community Businesses in England also employ 35,500 paid staff and 119,500 volunteers. Community Business Weekend is an opportunity to showcase what’s possible when local people take control and demonstrate their value to the local economy and society.
To find out about other Community Business Weekend events in your area and for more general information, visit www.communitybusinessweekend.org.

Held at Northwood House and a great opportunity for some of our team to meet everyone! 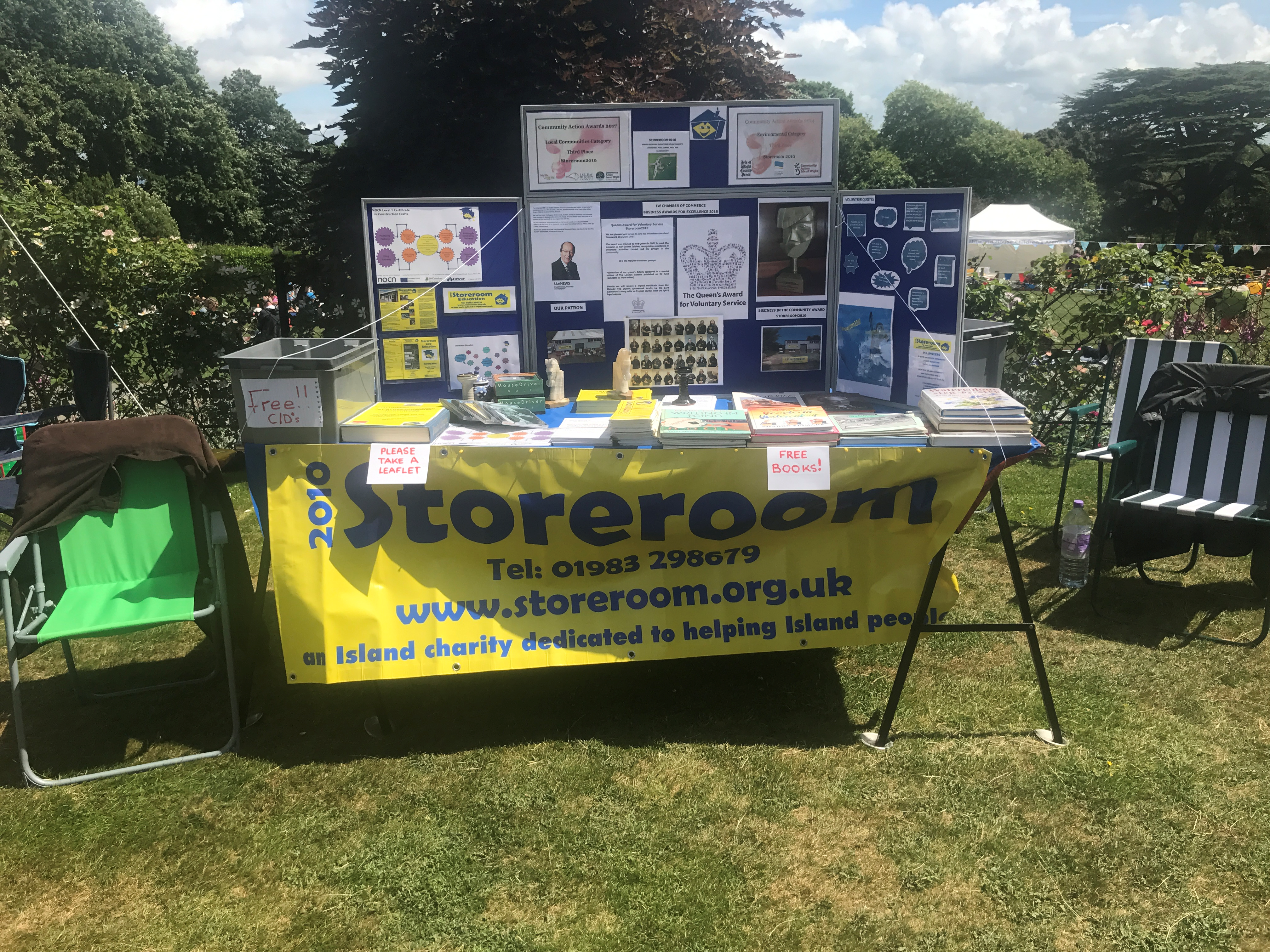 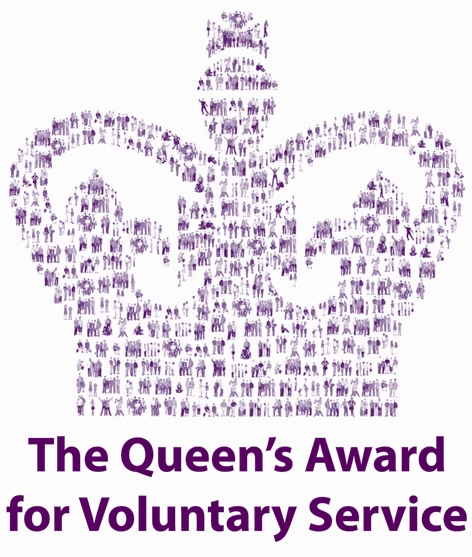 The Queen’s Award for Voluntary Service

We are pleased and proud to say our volunteers received this award on 2 June 2017. The award was created by The Queen in 2002 to mark the occasion of her Golden Jubilee, recognising excellence in voluntary activities carried out by groups in the community. It is the MBE for volunteer groups. 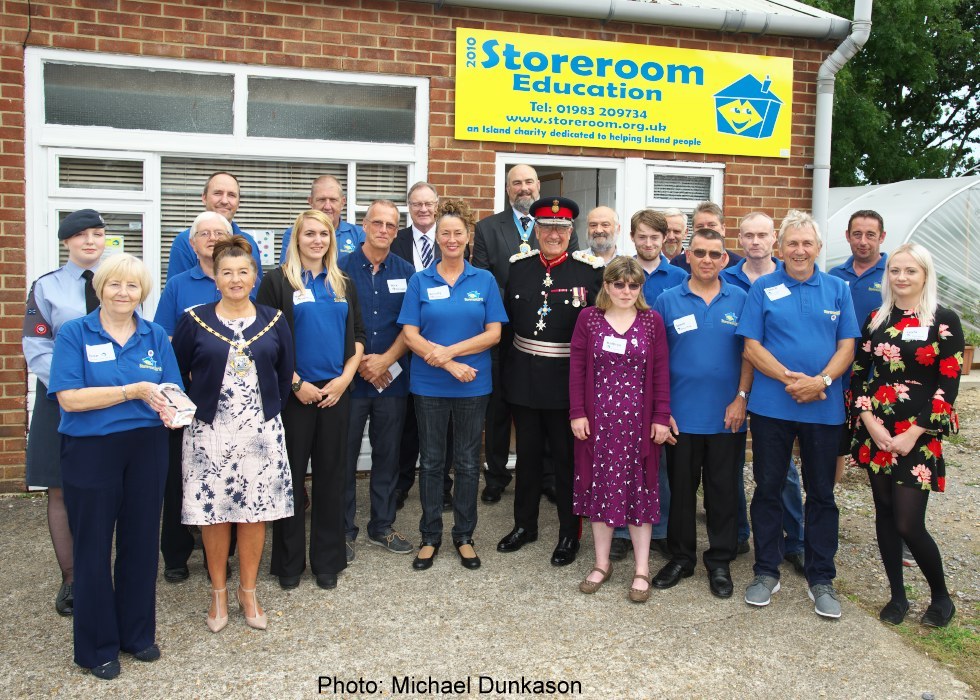 Publication of our group’s details appeared in a special edition of The London Gazette published on 02 June (available to view online). We received a signed certificate from Her Majesty The Queen; (presented locally by the Lord Lieutenant) along with a commemorative English Crystal. 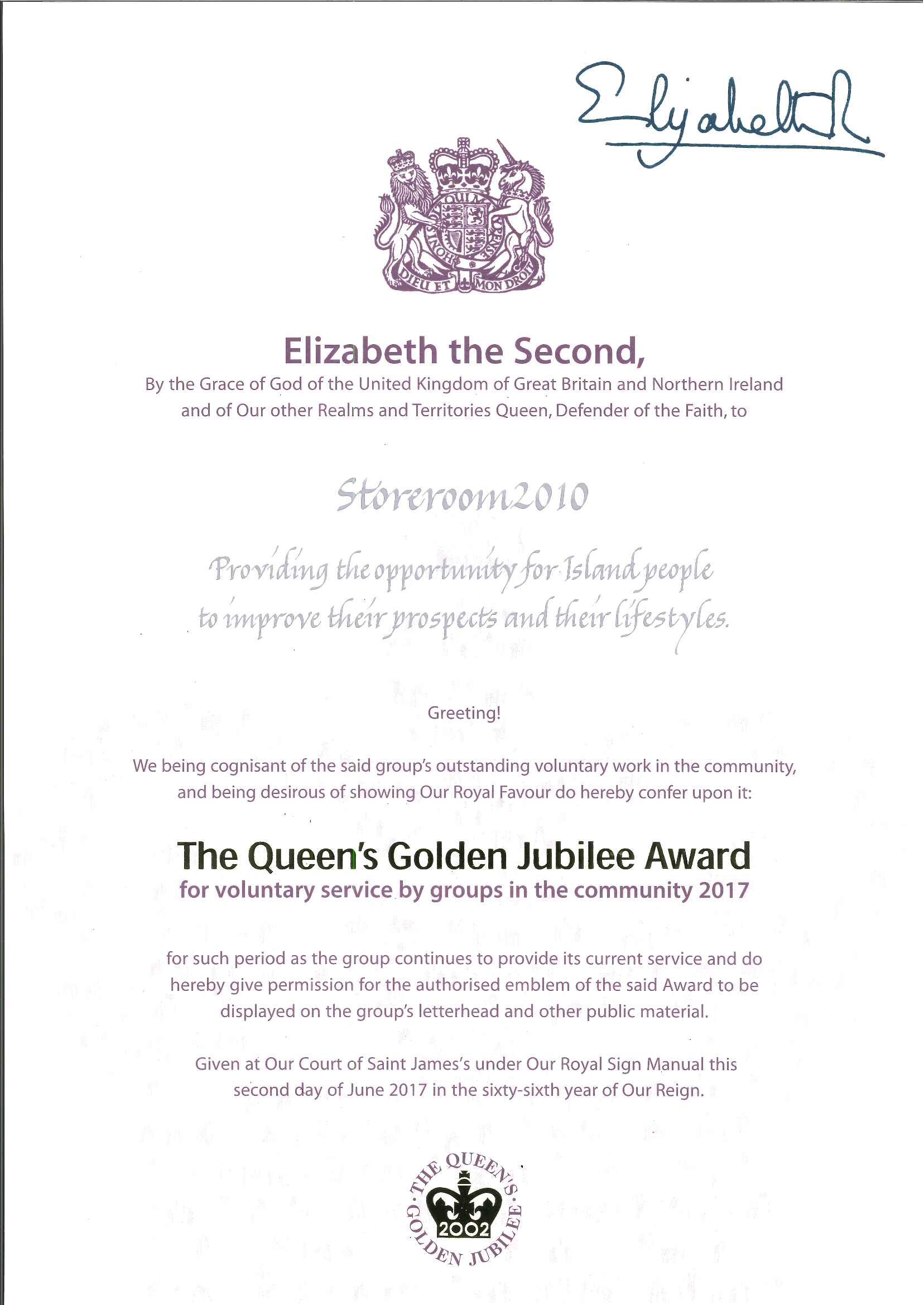 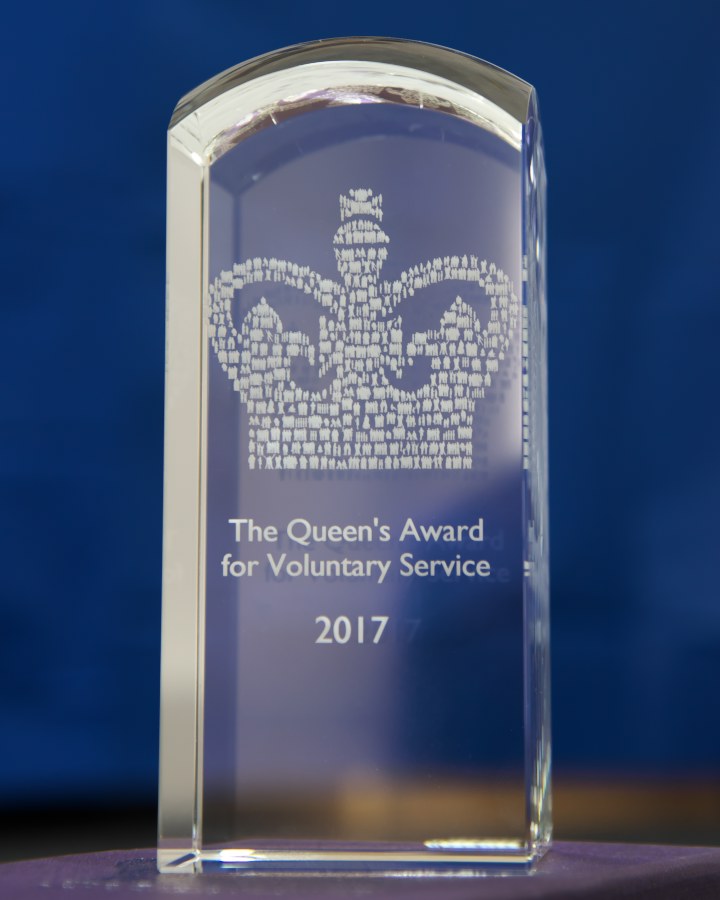 The work Storeroom does for the community was very much admired by the Independent Assessment Committee, chaired by Sir Martyn Lewis CBE.

The Queen’s Award for Voluntary Service 2017 represents a tremendous achievement for our organisation. We hope that everyone involved, and particularly our volunteers, feel immensely proud of the recognition that this Award represents. 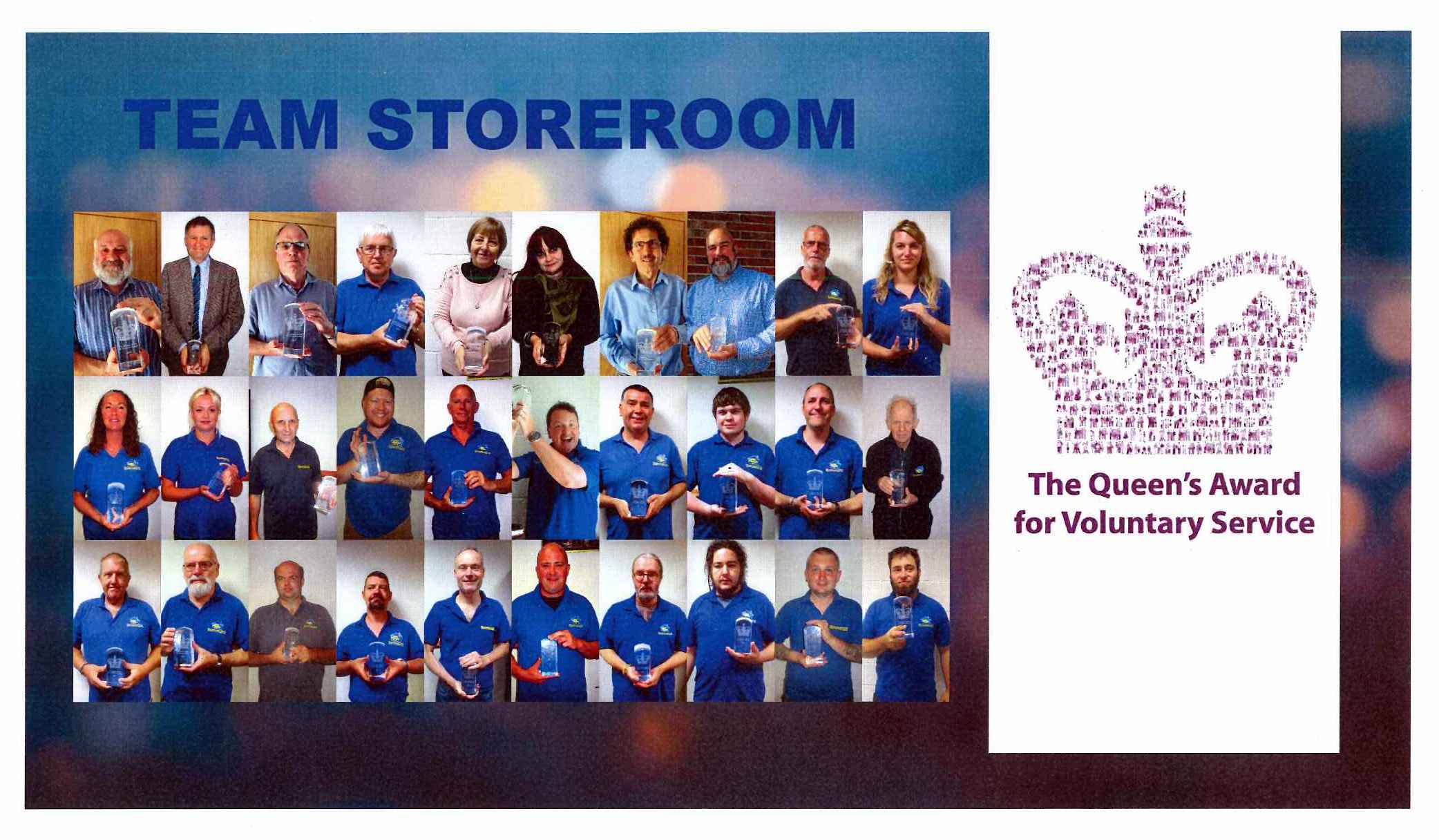 Storeroom2010 – winners of the Business in the Community Award

Isle of Wight Chamber of Commerce Business Awards for Excellence 2016 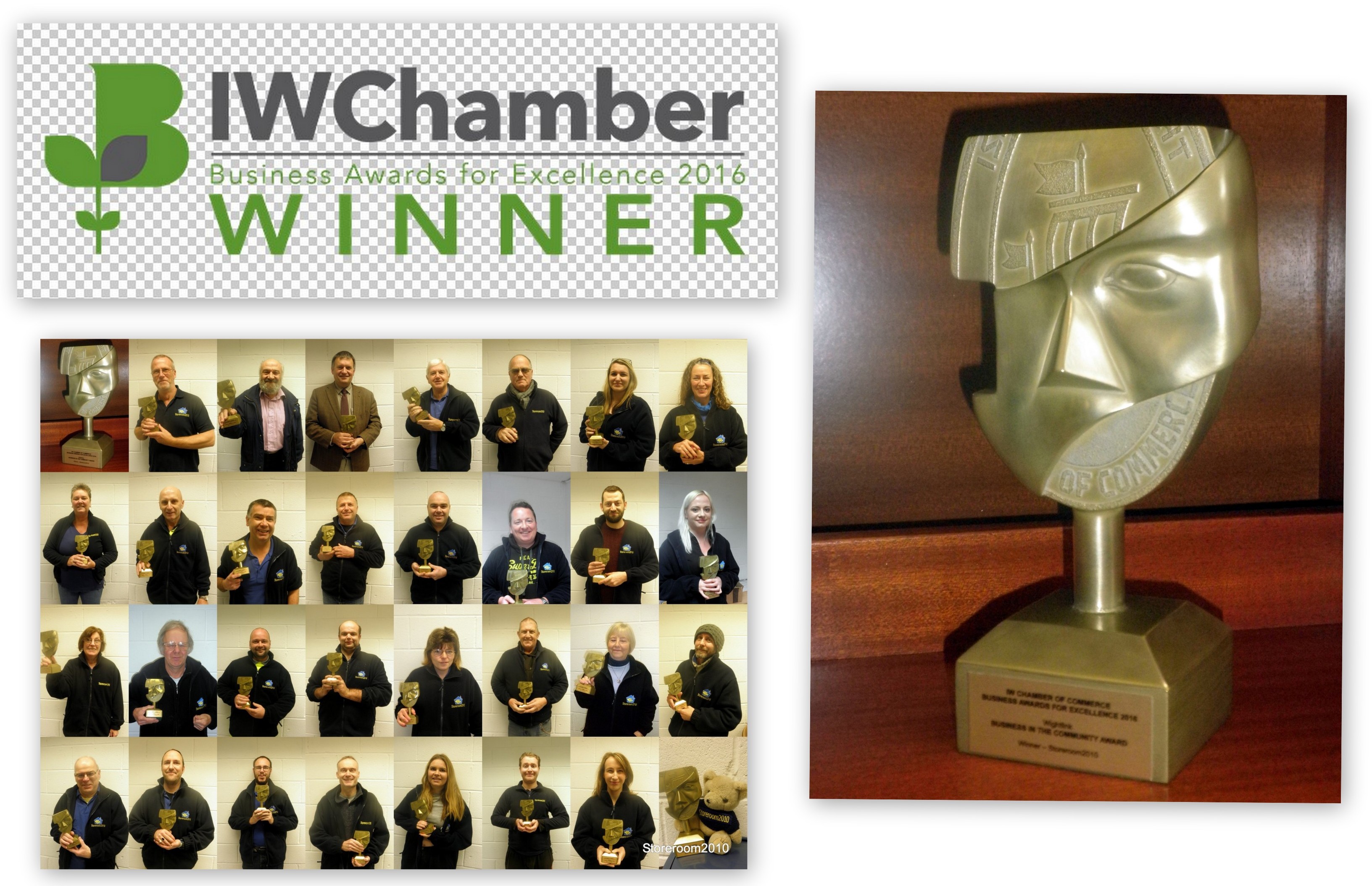 Our first award came from another local organisation, Wightmind, The Isle of Wight Association for Mental Health, who are now part of the Richmond Fellowship.

Wightmind were established for the relief of sickness of persons suffering or recovering from mental health problems by the care, treatment and rehabilitation or such persons. 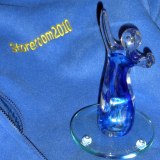